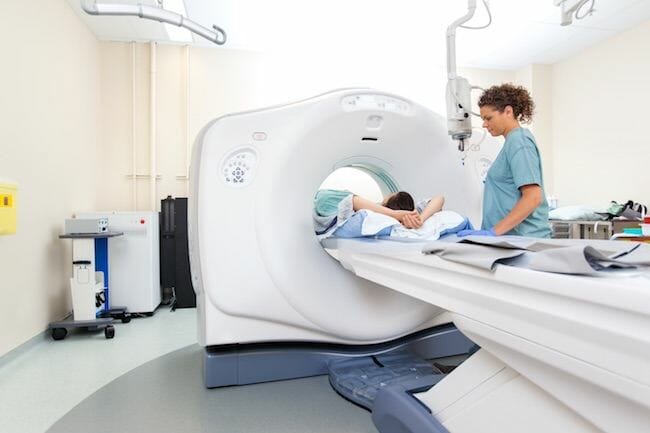 Radiology is known as the science of using medical imaging to help diagnose and, in some cases, treat diseases in the human body. Many different imaging techniques are a part of radiology including x-ray, computed tomography (CT), magnetic resonance imaging (MRI), ultrasound and more.

The history of radiology started with Wilhelm Roentgen in 1895. Wilhelm was able to take the first x-ray, which was of his wife and won the Nobel Prize in physics in 1901 due to his new discovery. He had experimented with passing electric currents through a tube and by doing so, was able to figure out how to turn this experiment into an X-ray.

The ability to take an x-ray was a huge advancement in the medical community. It allowed for the diagnosis of fractures, broken bones, ailments and much more. It wasn’t long after Wilhelm’s discovery that machines were produced and x-ray technology became a commonly used diagnostic procedure throughout the medical community.

Originally, radiographs were made onto glass photographic plates. When George Eastman introduced film in 1918, things changed a bit. However, today, many of the radiographic images are recorded and stored digitally.

Over the years, many new techniques falling into the radiology category have been introduced. CT scanning was one of them, which was invented by Godfrey Hounsfield and announced in 1972. In addition, ultrasound started to be used in the 1950s with “real-time” ultrasound machines coming to the medical community in the late 1970s.

Other Important Discoveries and Events throughout the History of Radiology

Many new discoveries happened throughout the history of radiology, but none were more significant than these first discoveries. It wasn’t until 1913 that another discovery was made when Albert Salomon’s research lead to mammography. About 14 years later, Egas Moniz developed cerebral angiography and another six years later Fredric and Irene Joliot-Curie were able to produce radioisotopes artificially.

The 1950s were an important decade as David Edmund Kuhl invited the PET technology or Positron Emission Tomography. In addition, Sven-Ivar Seldinger developed a technique The 1950s were also the decade when Ian Donald invented ultrasound.

The history of radiology continued into the 1960s when Charles Totter introduced image-guided intervention and Benjamin Felson publishes the Felson’s Principles of Chest Roentgenology. The 1970s brought along the CT Scanner, which came from Godfrey Hounsfield and Allan MacLeod Cormack. In addition, the first commercial MRI Scanner was developed by Raymond Vahan Damadian in 1977.

Radiology has become rather common in the medical community today, but it’s history is rather short. It’s been around for a little more than 120 years, dating back to the first invention. However, many of the techniques used in radiology today have been around for less than 100 years.

To learn more about radiologists, take a look at our recent article on A Day in the Life of a Radiologist.